Menu
Out of stock

Blue Spot was originally produced by the Mitchell family who commenced trading in 1805 at 10 Grafton Street in the heart of Dublin city as purveyors of fine wine and confectionery. Seven generations later, the company is still in the wine and spirits business under the stewardship of Jonathan Mitchell and his son Robert.  The Mitchell family expanded into the whiskey bonding business in 1887, whereby they sent empty wine and fortified wine casks via horse and cart to the local Jameson Distillery which were then filled with new Pot Still spirit and returned to the Mitchell’s maturation cellars. There, the whiskeys matured for many years under bond until they were ready to be bottled and sold. The Blue Spot name was derived from the Mitchell’s practice of marking their maturing casks of whiskey with a mark or daub of coloured paint to determine the age potential of the whiskey. Blue Spot was a 7 year old whiskey, Green Spot (10 year old), Yellow Spot (12 year old) and Red Spot (15 year old). As a colourful history would have it, this revered Blue Spot has remained underground until now and its introduction reunites the historical Spot Family for the first time in over 56 years.

Embodying the unmistakable qualities of Single Pot Still Irish Whiskey. Blue Spot is matured for no less than 7 years in Bourbon casks, Sherry butts and Portuguese Madeira casks all bottled at cask strength for you to enjoy!  Non chill filtered and bottled at cask strength, nothing is added or taken away, for a whiskey that is full flavoured and uniquely satisfying.

Be the first to review “MITCHELLS BLUE SPOT” Cancel reply 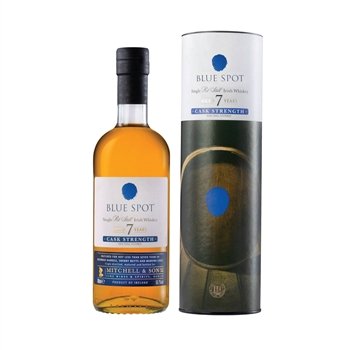